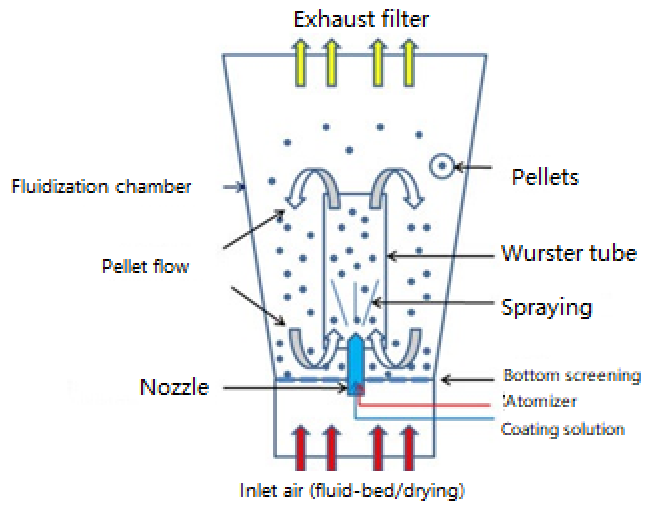 ■  Air flows through the inside/outside of Wurster insert, and the spray gun is perpendicular to the bottom plate, and parallel to the Wurster insert.

■  Air is discharged from the exhaust filter at the top of equipment.

■  Keeping a certain velocity and temp. of inlet air, to promote the fluidization and drying of materials.

■  Adjust the height of Wurster insert, and the pellets on the bottom plate (hereafter called as “bottom bed”) are sucked into the Wurster insert due to the “Venturi Effect”, then sprayed by coating  solutions from spray gun.

■  The coating material slows down when it reaches the expansion chamber (also called as “top bed”), and falls around Wurster insert by gravity, then circulates back to spray zone due to “Venturi Effect”.

Fluidizing air is the heat source of particle fluidization and drying, and the carrier of moisture in the fluidized bed. The fluidizing air velocity, which is an important factor for particle fluidization, should be greater than critical velocity and less than that of particle taken-out. Most of the air flow in fluidized bed flows through the Wurster insert, and the linear velocity of the inlet airflow in Wurster insert can be calculated according to its diameter, area and air volume. 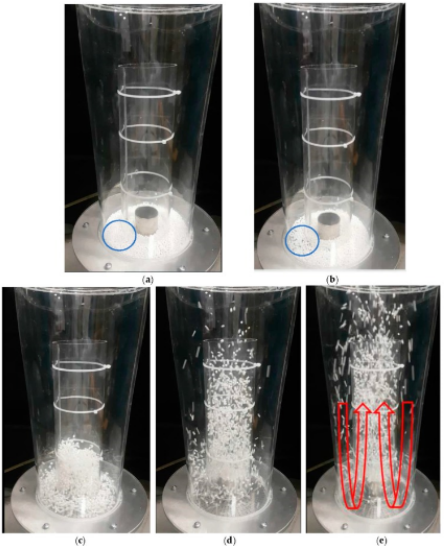 （c）Comparing to the blue circle, the bed porosity is increased when particles start to vibrate.

（d）Boiling. The thin and dispersed particles begin to boil and scatter.

（e）Particles move in a U-shaped cycle via Wurster insert.

The higher fluidizing air velocity and more intense particle fludization, the stronger collision force between particles, which is better for liquid bridge breaking between particles, strengthen the heat transfer between liquid film and air, and hard to agglomeration. Particles fluidization is mainly in a coating mode.

However, with velocity accelerated and mechanical force acting on particles increased, badly abrased on particles will occur, and the small droplets from spray gun may be dried before reaching fluidized bed chamber. Besides, the broken particles may collide with intact particles and together to form a agglomeration. 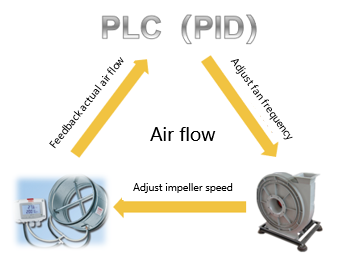 ●  Air is the heat-carrying medium, transfers the heat needed for wet separation and evaporation.

●  Sufficient and stable inlet air flow is the basis for forming a better fluidization.

●  During process amplification, keep the linear velocity of air inlet flow similar in draft tube is the key to success.

○  Air distribution plate: choosing an upbed and downbed combination airflow distribution plate with different opening ratio according to the particle size and loading capacity of materials. (See pictures below)

○  Lifting device of draft tube: adopts simultaneous lifting and lowering structure, so that the gap between each tube and air distributor is unified, and with same fluidization uniformity.

Experimental tests show that the use of air deflector can obviously improve the uniformity of air distribution. The air deflector of fluidized bed that Canaan adopts is specially designed, which can form spiral airflow, reduce the deviation of airflow uniformity on bed, and make the airflow deflector fluidization to be consistent.