This chapter categorizes high shear mixers according to their configuration. All these types can perform different mixture processes as described previously, each with its own degree of efficiency. Moreover, mixer configurations are application dependent. For example, batch shear mixers may not be applicable to pharmaceutical industries due to its susceptibility to contamination; nor an ultra-high shear mixer for paint or ink production.

This type mixes all components by batch and in large volumes in a tank or vessel. Charging of the components is usually done at the top of the vessel. Batch high shear mixers can also be configured to have only one mixing head that can be lifted and suspended serving several vessels. Batch mixing is said to process faster than in-line high shear mixers with the same power rating. One problem in this system is the cleaning process between batches with varying formulations. This problem is particularly evident in viscous mixtures. Residues from the previous batch can become a contaminant to the next batch. To solve this problem, clean in place (CIP) systems are employed. 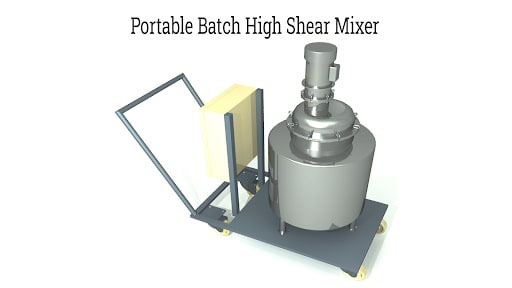 This type involves mixing the components in a chamber with an inlet and an outlet. Since high shear mixers create centrifugal force, it then acts as a pump to drive the mixture through the chamber. The chamber is always closed making it less prone to contamination, in contrast to the batch type. Moreover, since the inline mixer is part of the product stream, it is more controlled than batch mixers. The product flowing from the mixer can be monitored continuously which enables process operators to modify parameters in real-time.

In a typical setup of an in-line high shear mixer, a mixing pot or vessel is used to collect and combine all raw materials. This vessel may be a simple mixing chamber or a batch mixer.

Through a static head, the pre-mixed materials are then transferred into the in-line high shear mixer. The static head is important since most in-line mixers does not have self-priming capabilities. As the in-line high shear mixer homogenizes the materials, the mixture is either transported to downstream equipment or recirculated back into the mixing chamber. Once the desired particle size and a continuous phase is attained, recirculation is stopped. The material is then diverted to downstream processes. 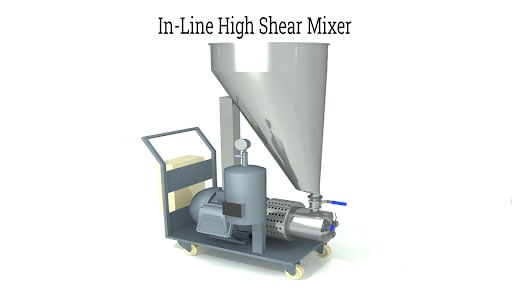 This type of high shear mixers uses vacuum systems to draw powdered components directly into the mixing head. A vacuum is generated on the rotor-stator assembly drawing the powder from a hopper. This solves several problems that arise when dealing with difficult to process powders. 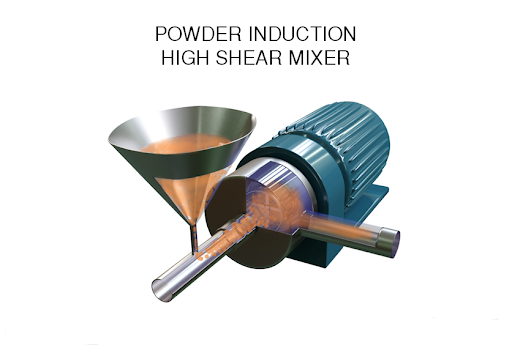 When charged into the mixing chamber, some powders quickly agglomerate upon contact with the liquid. Clumps tend to form on the surface of the liquid which will then require higher mixing speed to form a vortex. The vortex is required to draw the powders to the mixing head. To mitigate this, these powdered components need to be added carefully and slowly to prevent agglomeration on the surface. However, adding too slowly can cause the continuous phase to reach its target parameters without thoroughly combining dispersed particles that are still undissolved and floating on the surface. In a mass production scale, this directly impacts throughput and in turn, profit margins.

Other scenarios that could happen are the irreversible changes in viscosity and degradation by heating. Breaking the particles further by over shearing it can cause the mixture to become thinner or thicker than the desired viscosity. This is evident in non-Newtonian liquids. Shear-thinning liquids become less viscous when subjected to shear, while shear-thickening liquids do the opposite. A property of non-Newtonian liquids is thixotropy where the liquid becomes thinner as it is being sheared. This time-dependent, thinning property of the liquid makes the mixing time critical, else the product will be off-specifications.

Degradation happens when the components become overly heated, creating unwanted chemical reactions. This is prevalent to batch type mixers since the chamber is a closed system. Mixing adds mechanical energy into the system creating friction between fluid molecules. This friction then becomes heat that can degrade the system.

This process involves converting fine powders into strong, dense agglomerates called granules. This is done by mixing the powdered components and a binding liquid, aided by agitation as provided by an impeller. This process is known as wet granulation. High shear mixers, compared to ordinary mixers, also provide the means to break down the powder into finer particles. 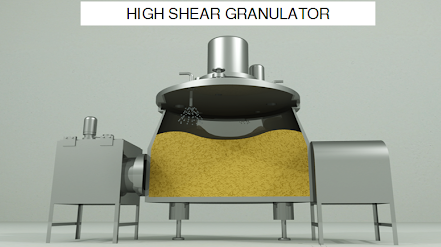 Wet granulation can be broken down into three processes: wetting, growth, and breakage. Wetting happens when the powder encounters the binder liquid. This forms large agglomerates or powder masses known as nuclei. These nuclei then collide with one another resulting in consolidation and growth. As this happens, the large agglomerates become denser. The resulting granules are not uniform in size which are then broken down by the mixer. Shearing and impact forces break the granules to its final particle size.

Aside from adding a liquid binder, dry powders can act also as a binder. This powder melts due to the increase in temperature from the mixing itself or through heaters. This solves problems from liquid binders such as clogging of pumps and nozzles due to high viscosity.

These types are designed to run at very high speeds aimed to produce a very fine particle size distribution. This causes dispersed solids and liquids to be homogenized faster into a continuous phase. The rotor is specially contoured to create high pumping capacity and shear intensity. Vortices are created both above and below the mixing head. These vortices draw the mixture into the mixing head which is then expelled radially through the stator slots. Also, the vortex is capable of drawing agglomerates floating on the surface. 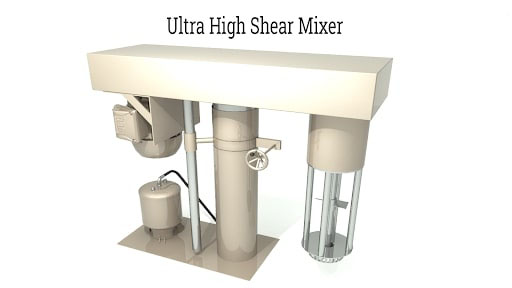