What is a high shear mixer?

The shear force of the mixed components is generated by the relative motion of the rotating and stationary components of the mixer. The rotating component can be an impeller or a group of impellers, paddles or screws. On the other hand, the stationary parts are the walls of the tank or chamber, and in some designs, the baffles and vanes.

High shear mixers are commonly used in manufacturing industries where different components or ingredients are mixed, such as food manufacturing, pharmaceuticals, cosmetics, plastics, etc. The principle of the high shear mixer can also be seen in chemical and petrochemical plants used to aid in reaction processes.

A fluid is any liquid or gaseous substance that can flow freely and is not bound or restricted by any surface effects. The study of the behavior of fluids is called fluid mechanics. A fluid, such as a solid, can be subjected to forces, stresses or pressures. A flowing fluid is subject to shear stress, which is the driving principle of a high shear mixer.

Note that at the surface, the moving body and the fluid molecules in direct contact have the same velocity. This is referred to as a no-slip condition. Intermolecular forces act between the fluid molecules and the body surface (called the boundary layer), creating an attractive force. It can also be noted that once the steady state is reached, the velocity profile is linear. There is no longer an acceleration to the movement and therefore no longer a force to deform or shear the fluid. The motion is transmitted through each layer of the fluid and then cancelled out by its viscosity.

Laminar flow occurs when the fluid flows uniformly over these layers without any interruption. The addition of different objects to cause shear forces acting in different directions can disrupt this flow. This type of flow, called turbulence, is chaotic and results in mass transfer across fluid layers. Uneven flow across fluid layers can also lead to mass transfer. This can effectively break up droplets suspended in the mixture, leading to emulsification, dispersion and homogenization of the components.

A high shear mixer typically has two main components: the rotor and the stator. This component is called the mixing head or generator. The rotor accelerates the fluid tangentially, but due to the inertia of the fluid, it does not flow completely with the rotor. The fluid flows into the shear gap or the area between the rotor tip and the stator. Within the shear gap, there is a high velocity difference and turbulent fluid flow that produces a high shear rate.

The contours of the rotor and stator, their configuration relative to each other, and other features such as holes and slots all contribute to producing the desired fluid flow depending on the application. 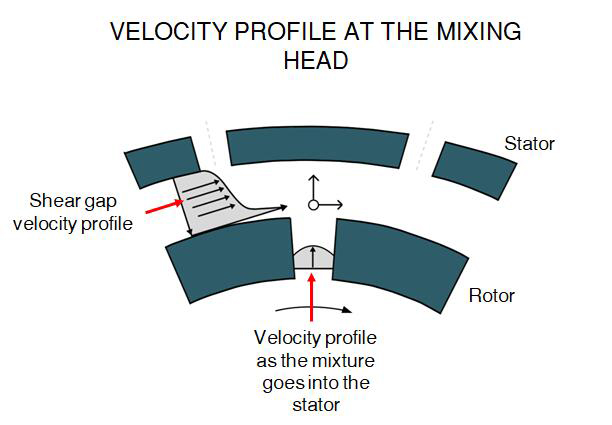 The following are some of the processes performed by high shear mixers.

This requires that the droplets be uniform in size and completely distributed to form a mixture with one continuous phase. The liquid in droplet form is in the dispersed phase, while the liquid in droplet suspension is in the continuous phase. In an emulsion, a natural separation occurs between the dispersed and continuous phases. This is particularly evident in immiscible liquids such as oil and water. Oils are non-polar, so they are not attracted to water molecules. In addition, oils are usually lighter than water, allowing them to float on surfaces. Because of these properties, oil tends to separate naturally from water. The purpose of a high shear mixer is to continuously break up these droplets before natural separation occurs.

Another type of emulsion is a miscible liquid-liquid mixture, but with a different viscosity. Adding low viscosity droplets to a high viscosity solvent requires more mixing time and a controlled rate of component addition.

Suspension mixtures have solid particles that are large enough to settle and they cannot be completely dissolved in the mixture. The objective is the same as emulsion homogenization, to break down the large solid particles into smaller particles while dispersing them uniformly into the medium.

In this application, the solid or semi-solid material is ground into finer particles in solution or fine suspension. The size reduction depends on the hardness of the product.

This involves mixing a solid product with a binder or granulating liquid. When the powder and binder are mixed, the mixture is continuously molded to produce a high density of particles.

Most manufacturers advertise that their equipment is capable of performing all of these functions. This is partially true; any mixer can do this, but at a very low efficiency. High-shear mixers are carefully designed to take into account the phase of the dispersed particles, the fluid viscosity, the desired particle size, etc. Computational Fluid Dynamics (CFD) analysis is used to simulate the operation of the mixer to determine the optimal geometry of the rotating and stationary components.