Since the reform and opening up, China’s economy has grown rapidly and become the second largest economy in the world. In this process, China’s economy has formed a unique development model, and its achievements have attracted the attention of the world. However, the “Pearl River Delta” model, the “Southern Jiangsu” model and the “Wenzhou” model, as its representatives, are all based on China’s huge demographic dividend, with high investment and large expansion as the driving force of development. Those development models depend upon large-scale markets and the support of the high proportion of labor force. With the emergence of new forms of Chinese society, such as aging, low fertility rate and informatization, China’s economic model is gradually developing towards “Service-oriented”, which will have a profound impact on the pharmaceutical industry and pharmaceutical equipment industry in the Secondary Industry.

Under a series of social economic situations, such as the weakening of labor supply and the changing values of working population, what new demands do customers have for the core equipment in solid dosage----Tablet Press Machine? What original demands have been amplified?

Demand is the direction

The core of above-mentioned contradiction is the lack of labor force, so the demand is centered on “People”.

First of all, the improving requirement of employees' income, safety and working environment poses new challenges to the performance and safety protection of Tablet Press Machine;

Secondly, the improvement of employees’ requirements further drives enterprise to find ways to shorten the working hours and non-production time;

Lastly, in the face of increasing costs and fierce market competition, enterprise will spontaneously reduce all kinds of waste.

What does safety include?

How to do safety protection?

The T-series High-speed Tablet Press Machine manufactured by Canaan is unique in the safety protection design.

1. Opening any door of the tablet press chamber or removing tablet channel, the separate safety module will immediately stop the movement of inner-door parts, same react as pressing the emergency stop switch. 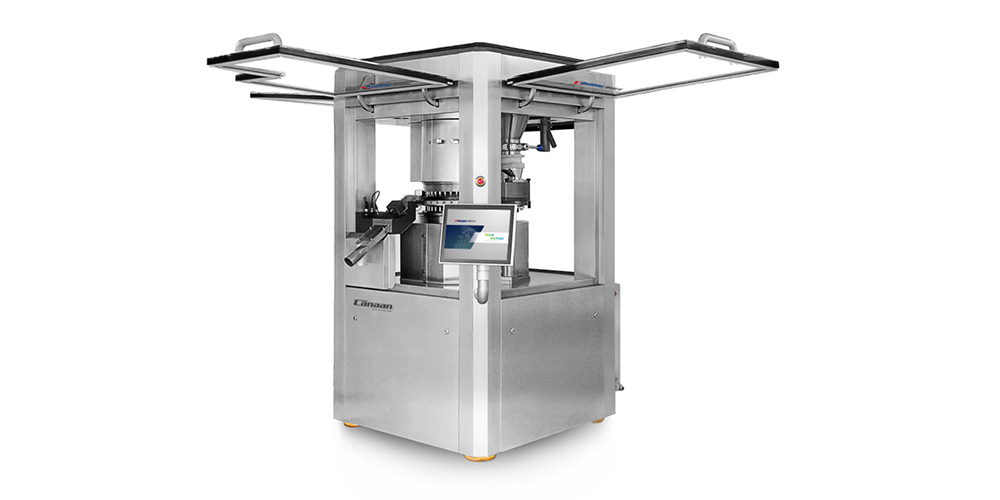 2. The main drive part is equipped with safety cover, to prevent the belt from hurting fingers when turning trolley.

3. It’s the only full-width double-layer hollow tablet pressing chamber door in China completely seals the tableting area, and the double-lip sealing strip forms two “face contact” sealing belts, which effectively reduces noise and isolates dust. The design of the door support mechanism is ingenious. When the door is opened and supported, the closing force is generated, so that the door will not have cracks due to vibration during operation. The hinge and the German imported gas spring are hidden in the upper frame, avoiding mutual pollution and cleaning dead corners.

4. The pitch angle of touch screen is adjustable, convenient for operators of different height.

5. The bin which can be disassembled through upper or lower should avoid work at height when site-cleaning.

After continuous 24 hours production of T700, the tablet room is as clean as new, and the dust is completely isolated in the tablet chamber.